During lobbying and debate, delegations with similar suggestions will begin to come together to form working groups, and delegates will combine ideas and suggestions to create resolutions. Resolutions are suggested solutions to the global community for the topic at hand and are the end result of debate and working papers. Resolutions are written by these groups of delegates and voted on by the committee as a whole.

While healthy debate and constructive caucusing are very important to MUN, they exist simply to lead the delegates to a final product – the resolution.

Clause: one section of a resolution, containing one argument or one action.

Phrase: Phrases are the first words of a clause. They introduce the clause and define the nature of its recommendations.

Preambulatory Clause: The Preambulatory clause (also called preamble) of a resolution states the reasons for addressing the topic. Preambles can reference the UN charter and past international actions. Each clause begins with a Preambulatory phrase and ends with a comma. 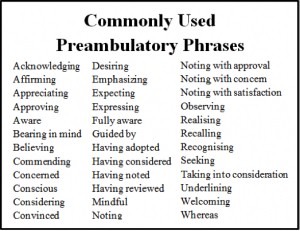 Operative Clause: Actions and recommendations made in a resolution are written in the form of operative clauses (or operatives, for short). Each operative is numbered, begins with an operative phrase, and ends with a semicolon. Operative should be organised logically with each clause containing a single idea or proposal. The resolution ends in a period after the last operative. 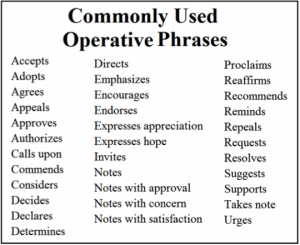 Amendment: An amendment is a change that a delegate would like to introduce to the resolution once it has already been submitted to the Chair.

Resolution Format: A resolution should be written as one continuous sentence. Resolutions have a very specific and strict format that allows the reader to easily follow the resolution and avoids confusion or ambiguity within the clauses. The following is a brief outline of the official resolution format.

All resolutions submitted by working groups at the Conference must adhere to this format:

Problem 1: Some communities are too far from food sources to get regular food supplies.

Solution A: Development of local capacity to produce food through agriculture.

Problem 2: High temperatures and an increased rate of natural disaster due to climate   change

are hindering some farmers’ abilities to grow their normal crops.

Solution A: Genetically engineered crops that can work in these changing, harsher

Solution B: Agro-ecological practices to make farming systems for resilient.

distribution of food aid, transparency and efforts to combat corruption.

Welcoming the outcome of the seventeenth session of the Commission on Sustainable Development on the thematic cluster of issues on agriculture, rural development, land, drought, desertification and Africa,

Emphasizing that the United Nations can play an effective role in building a global consensus in addressing agriculture development and food security,

1. Encourages international, regional and national efforts to strengthen the capacity of developing countries, in particular their small-scale producers, to enhance the productivity of food crops, and to promote sustainable practices in pre-harvest and post-harvest agricultural activities;

2. Underlines the importance of the conservation of, access to, and fair and equitable sharing of the benefits arising from the use of genetic resources, in accordance with national law and international agreements;

3. Reaffirms the need to mobilize the resources needed to increase productivity, including the review, approval and adoption of biotechnology and other new technologies and innovations that are safe, effective and environmentally sustainable;

4. Recognizes the urgency of, and reaffirming its commitment to, reaching a successful and timely conclusion by 2010 to the Doha Round of World Trade Organization negotiations with an ambitious, comprehensive and balanced outcome as a key action to improve food security;

5. Notes the challenges faced by indigenous peoples in the context of food security, and in this regard calls upon States to take special actions to combat the root causes of the disproportionately high level of hunger and malnutrition among indigenous peoples.

*Clauses in this article selected from A/RES/64/224: Agriculture development and food security*

1.       Requests: countries to treat any data package with isonomy, regardless of content, origin and destination, service terminal or application and refrain from deep packet inspection,

2.       Urges: entitlement to clear and complete information on the collection, use, storage, treatment and protection of the data,

3.        Emphasising: the requirement of express consent from users about collection of meta data and search histories,

4.       Supports: no or limited censorship including libel, slander, hate speech, obscenity, content violating copyright detrimental to national security, and or violates rights of others,

6.       Encourages: to protect the rights of media and press if they are subjected to violent attacks and security threats,

7.       Considers to: exempt service providers from civil liability for third party content, especially if the intermediaries do not comply with court orders (which may require removal of content),

8.       Approves of: Wherever identifying copyright, the creator of infringing content be enabled to defend themselves in court,

9.       Recommends: Promotion of digital literacy and access to internet.