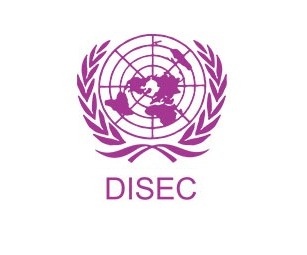 The United Nations (UN) Disarmament and International Security Committee (DISEC) was created as the first of the main committees in the General Assembly when the charter of the United Nations was signed in 1945. Thus, DISEC is often referred to as the First Committee. DISEC was formed to respond to the need for an international forum to discuss issues of peace and security among members of the international community. According to the UN Charter, the purpose of DISEC in the General Assembly is to establish ‘general principles of cooperation in the maintenance of international peace and security, including the principles governing disarmament and the regulation of armaments’ and also to give ‘recommendations with regard to such principles to the members or to the Security Council.’ Although DISEC cannot directly advise the decision-making process of the Security Council, the fourth chapter of the UN Charter explains that DISEC can suggest specific topics for Security Council consideration.